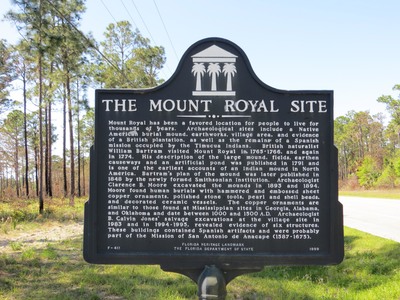 The marker reads: "THE MOUNT ROYAL SITE -- Mount Royal has been a favored location for people to live for thousands of years. Archaeological sites include a Native American burial mound, earthworks, village area, and evidence of a British plantation, as well as the remains of a Spanish mission occupied by the Timucus Indians. British naturalist William Bartram visited Mount Royal in 1765–1766, and again in 1774. His description of the large mound, fields, earthen causeways and an artificial pond was published in 1791 and is one of the earliest accounts of an Indian mound in North America. Bartram’s plan of the mound was later published in 1848 by newly formed Smithsonian Institution. Archaeologist Clarence B. Moore excavated the mounds in 1893 and 1894. Moore found human burials with hammered and embossed sheet copper ornaments, polished stone tools, pearl and shell beads, and decorated ceramic vessels. The copper ornaments are similar to those found at Mississippian sites in Georgia, Alabama and Oklahoma and date between 1000 and 1500 A.D. Archaeologist B. Calvin Jones’ salvage excavations at the village site in 1983 and in 1994–1995, revealed evidence of six structures. These buildings contained Spanish artifacts and were probably part of the Mission of San Antonio de Anacape (1587–1675). F-411 FLORIDA HERITAGE LANDMARK THE FLORIDA DEPARTMENT OF STATE 1999" Top of sign: Florida Heritage emblem