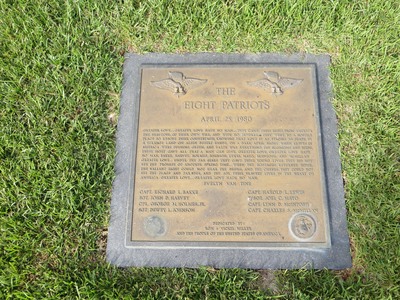 The marker reads: "The Eight Patriots -- April 25, 1980 Greater love... Greater love hath no man... They came, these eight, from America the beautiful, of their own will, and with no fanfare... They went to a hostile place to rescue their countrymen, knowing that love is as strong as death. In a strange land on alien desert sands, on a dark April night when leaves in America were turning green, and earth was awakening the blossoms and birds, these eight gave all that a man can give. Greater love, greater love hath no man Bakke, Harvey, Holmes, Johnson, Lewis, Mayo, McIntosh, and McMillan Greater love.. Under the far stars they gave their young lives. They did not see the promise of another spring time... When the hostages returned home, the valiant eight could not hear the drums, and the cheers, they could not see the flags and parades, and the joy. Their bravery lives in the heart of America greater love... Greater love hath no man. Evelyn Van Tine Capt. Richard L. Bakke Sgt. John D. Harvey Cpl. George M. Holmes, Jr. Sgt. Dewey L. Johnson Capt. Harold L. Lewis T/Sgt. Joel C. Mayo Capt. Lynn D. McIntosh Capt. Charles S. McMillan Dedicated By Ron & Vickie Miller And The People of The United States Of America" Bottom right: United States Marine Corps emblem