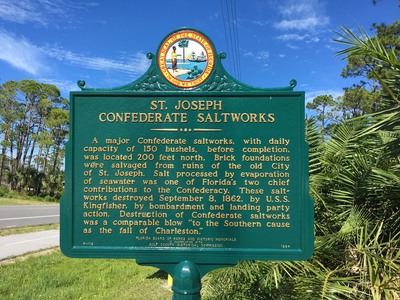 The marker reads: "ST. JOSEPH CONFEDERATE SALTWORKS -- A major Confederate saltworks, with daily capacity of 150 bushels, before completion, was located 200 feet north. Brick foundations were salvaged from ruins of the old City of St. Joseph. Salt processed by evaporation of seawater was one of Florida's two chief contributions to the Confederacy. These saltworks destroyed September 8, 1862, by U.S.S. Kingfisher, by bombardment and landing party action. Destruction of Confederate saltworks was a comparable blow "to the Southern cause as the fall of Charleston." F-119 FLORIDA BOARD OF PARKS AND HISTORIC MEMORIALS IN COOPERATION WITH GULF COUNTY HISTORICAL COMMISSION 1964" Top of the sign: Image of the Great Seal of the State of Florida – In God We Trust