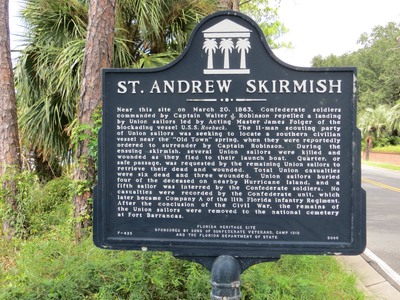 The marker reads: "ST. ANDREW SKIRMISH -- Near this site on March 20, 1863, Confederate soldiers commanded by Captain Walter J. Robinson repelled a landing by Union sailors led by Acting Master James Folger of the blockading vessel U.S.S. Roebuck. The 11-man scouting party of Union sailors was seeking to locate a southern civilian vessel near the "Old Town" spring, when they were reportedly ordered to surrender by Captain Robinson. During the ensuing skirmish, several Union sailors were killed and wounded as they fled to their launch boat. Quarter, or safe passage, was requested by the remaining Union sailors to retrieve their dead and wounded. Total Union casualties were six dead and three wounded. Union sailors buried four of the deceased on nearby Hurricane Island, and a fifth sailor was interred by the Confederate soldiers. No casualties were recorded by the Confederate unit, which later became Company A of the 11th Florida Infantry Regiment. After the conclusion of the Civil War, the remains of the Union sailors were removed to the national cemetery at Fort Barrancas. F-425 FLORIDA HERITAGE SITE SPONSORED BY SONS OF CONFEDERATE VETERANS, CAMP 1319 AND THE FLORIDA DEPARTMENT OF STATE 2000" Top of sign: Florida Heritage emblem