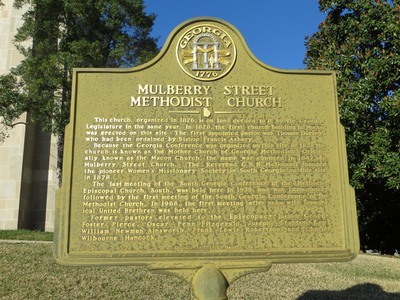 The marker reads: "MULBERRY STREET METHODIST CHURCH This church, organized in 1826, is on land deeded to it by the Georgia Legislature in the same year. In 1828, the first church building in Macon was erected on this site. The first appointed pastor was Thomas Darley, who had been ordained by Bishop Francis Asbury. Because the Georgia Conference was organized on this site in 1831 the church is known as the Mother Church of Georgia Methodism. Originally known as the Macon Church, the name was changed in 1847, to Mulberry Street Church. The Reverend G.N.N. McDonnell founded the pioneer Women’s Missionary Society in South Georgia on this site in 1878. The last meeting of the South Georgia Conference of the Methodist Episcopal Church, South, was held here in 1939 and was immediately followed by the first meeting of the South Georgia Conference of the Methodist Church. In 1968, the first meeting after union with Evangelical United Brethren was held here. Former pastors elevated to the Episcopacy include George Foster Pierce, Oscar Penn Fitzgerald, Joseph Stanton Key, William Newman Ainsworth, Frank Lewis Robertson and Charles Welbourne Hancock. 011-23 GEORGIA HISTORIC MARKER 1992" Top of sign: The Great Seal of Georgia – Georgia 1776 Constitution Justice Wisdom Moderation