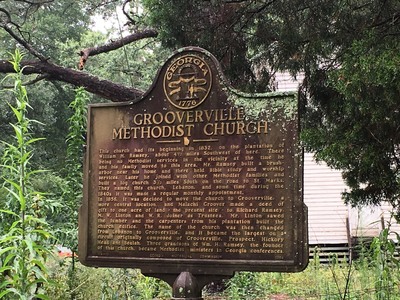 The marker reads: "GROOVERVILLE METHODIST CHURCH This church had its beginning in 1832, on the plantation of William H. Ramsey, about 4½ miles Southwest of here. There being no Methodist services in the vicinity at the time he and his family moved to this area. Mr. Ramsey built a brush-arbor near his home and there held Bible study and worship services. Later he joined with other Methodist families and built a long church 3½ miles South on the road to St. Mark. They named this church, Lebanon, and some time during the 1840’s it was made a regular monthly appointment.

In 1856, it was decided to move the church to Grooverville, a more central location, and present site – to Richard Ramsey. M. W. Linton and W. R. Joiner as Trustees, Mr. Linton sawed the lumber and the carpenters from his plantation built the church edifice. The name of the church was then changed from Lebanon to Grooverville and it because the largest on a circuit originally composed of Grooverville, Prospect, Hickory head and Beulah. Three grandsons of Wm. H. Ramsey, the founder of this church, became Methodist ministers in Georgia conferences. 014-10 GEORGIA HISTORICAL COMMISSION 1958" Top of sign: The Great Seal of Georgia – Georgia 1776 Constitution Justice Wisdom Moderation