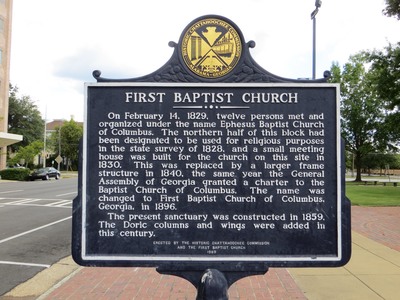 The marker reads: "FIRST BAPTIST CHURCH On February 14, 1829, twelve persons met and organized under the name Ephesus Baptist Church of Columbus. The northern half of this block had been designated for religious purposes in the state survey of 1828, and a small meeting house was built for the church on this site in 1830. This was replaced by a larger frame structure in 1840, the same year the General Assembly of Georgia granted a charter to the Baptist Church of Columbus. The name was changed to First Baptist Church of Columbus, Georgia, in 1896. The present sanctuary was constructed in 1859. The Doric columns and wings were added in this century. ERECTED BY THE HISTORIC CHATTAHOOCHEE COMMISSION AND THE FIRST BAPTIST CHURCH 1989" Top of the sign: Historic Chattahoochee Commission Alabama-Georgia emblem.