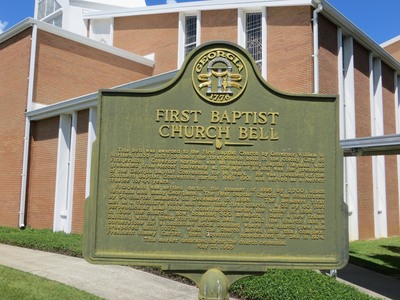 The marker reads: "FIRST BAPTIST CHURCH BELL This bell was awarded to the First Baptist Church by Governor William J. Northen (1833-1913) to honor the first church built in the Colony City of Fitzgerald. Governor Northen was an outstanding Baptist layman who graduated from Mercer University at the age of 18 and was president of the Georgia Baptist Convention for 14 years. He was president of the Southern Baptist Convention during 1899-1901 and served as a Mercer trustee for 44 years. Fitzgerald was settled during the summer of 1895 by 2,700 Union Veterans and many Georgians. The First Baptist Church was constituted by 34 charter members on December 15, 1895. The members first met in a furniture store and built their first church, a 32 by 60 feet perpendicular slab building constructed during the winter of 1896-97. In 1898 the church, now boasting 300 members, built a new frame building with a tower for the prized bell. In 1912 the church laid a cornerstone for a handsome brick building where the church grew and prospered until 1972, when the church moved into this complex. President Jimmy Carter, then Governor, rededicated the bell in 1974. This marker dedicated during the church centennial May 21, 1995." Top of sign: The Great Seal of Georgia – Georgia 1776 Constitution Justice Wisdom Moderation