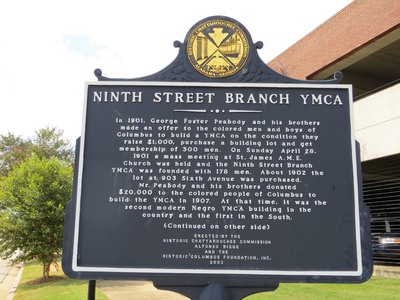 The marker reads: "NINTH STREET BRANCH YMCA In 1901, George Foster Peabody and his brothers made an offer to the colored men and boys of Columbus to build a YMCA on the condition they raise $1,000, purchase a building lot and get membership of 300 men. On Sunday, April 28, 1901 a mass meeting at St. James A.M.E. Church was held and the Ninth Street Branch YMCA was founded with 178 men. About 1902 the lot at 903 Sixth Avenue was purchased. Mr. Peabody and his brothers donated $20,000 to the colored people of Columbus to build the YMCA in 1907. At that time, it was the second modern Negro YMCA building in the country and the first in the South. (Continued on other side) ERECTED BY THE HISTORIC CHATTAHOOCHEE COMMISSION ALFONSO BIGGS AND THE HISTORIC COLUMBUS FOUNDATION, INC. 2002" Top of the sign: Historic Chattahoochee Commission Alabama-Georgia emblem.