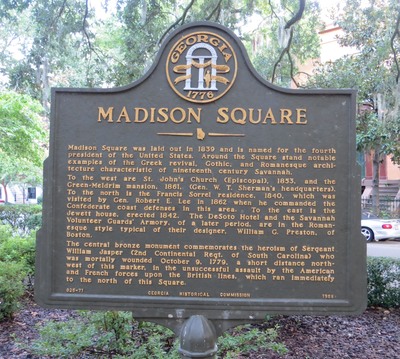 The marker reads: "MADISON SQUARE Madison Square was laid out in 1839 and is named for the fourth President of the United States. Around the Square stand notable examples of Greek Revival, Gothic, and Romanesque architecture characteristic of nineteenth century Savannah. To the west are St. John's Church (Episcopal), 1853, and Green-Meldrim mansion, 1861, (General W. T. Sherman’s headquarters). To the north is the Francis Sorrel residence, 1840, which was visited by General Robert E. Lee in 1862 when he commanded the Confederate coast defenses in this area. To the east is the Jewett house, erected 1842. The DeSoto Hotel and the Savannah Volunteer Guards’ Armory, of a later period, are in the Romanesque style typical of their designer, William G. Preston, of Boston. The central bronze monument commemorates the heroism of Sergeant William Jasper (2nd Continental Regt. of South Carolina) who was mortally wounded October 9, 1779, a short distance northwest of this marker, in the unsuccessful assault by the American and French forces upon the British lines, which ran immediately to the north of the Square. 025-71 GEORGIA HISTORICAL COMMISSION 1958" Top of sign: The Great Seal of Georgia – Georgia 1776 Constitution Justice Wisdom Moderation