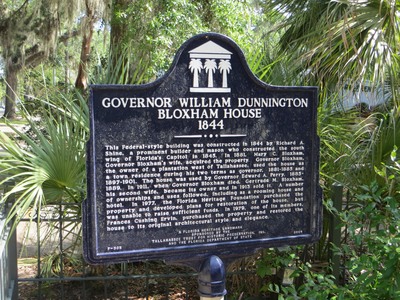 The marker reads: “GOVERNOR WILLIAM DUNNINGTON BLOXHAM HOUSE 1844 -- This Federal-style building was constructed in 1844 by Richard A. Shine, a prominent builder and mason who constricted the south wing of Florida’s Capitol in 1845. In 1881, Mary C. Bloxham, governor Bloxham’s wife, acquired the property. Governor Bloxham, the owner of a plantation west of Tallahassee, used the house as a town residence during his two terms as governor, 1881-1885 and 1897-1901. The house was used by Governor Edward A. Perry, 1885-1889. In 1911, when Governor Bloxham died, Gertrude M. Bloxham, his second wife, became its owner and 1913 sold it. A number of ownerships and uses followed, including as a rooming house and hotel. In 1977, the Florida Heritage Foundation purchased the property and developed plans for restoration of the house, but was unable to raise sufficient funds. In 1979, one of its members Frances Cushing Ervin, purchased the property and restored the house to its original architectural style and elegance. F505 – A Florida Heritage Landmark sponsored by the Tallahassee Trust for Historic Preservation, Inc. and the Florida Department of State 2004”