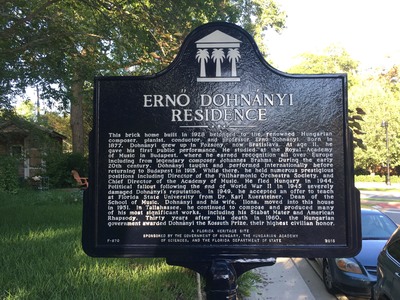 “Erno Dohnanyi Residence -- This brick home built in 1928 belonged to the renowned Hungarian composer, pianist, conductor, and professor, Erno Dohnanyi. Born in 1877, Dohnanyi grew up in Pozsony, now Bratislava. At age 11, he gave his first public performance. He studied at the Royal Academy of Music in Budapest, where he earned recognition all over Europe including from legendary composer Johannes Brahms. During the early 20th century, Dohnanyi taught and performed internationally before returning to Budapest in 1915. While there, he held numerous prestigious positions including Director of the Philharmonic Orchestra Society, and Chief Director of the Academy of Music. He fled Hungary in 1944. Political fallout following the end of World War II in 1945 severely damaged Dohnanyi’s reputation. In 1949, he accepted an offer to teach at Florida State University from Dr. Karl Kuersteiner, Dean of the School of Music. Dohnanyi and his wife, Ilona, moved to this house in 1951. In Tallahassee, he continued to compose and produced many of his most significant works, including his Stabat Mater and American Rhapsody. Thirty years after his death in 1960, the Hungarian government awarded Dohnanyi the Kossuth Prize, their highest civilian honor. F-870 - A Florida Heritage Site Sponsored by the government of Hungary, The Hungarian Academy of Sciences, and the Florida Department of State – 2015” Top of sign: Florida Heritage emblem