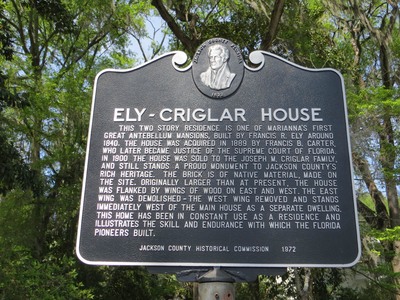 The marker reads: "ELY-CRIGLAR HOUSE This two story residence is one of Marianna’s first great antebellum mansions, built by Francis R. Ely around 1840. The house was acquired in 1889 by Francis B. Carter, who later became Justice of the Supreme Court of Florida. In 1900 the house was sold to the Joseph M. Criglar family, and still stands a proud monument to Jackson County’s rich heritage. The brick is of native material, made on the site. Originally larger than at present, the house was flanked nu wings of wood on east and west. The east wing was demolisher – the west wing removed and stands immediately west of the main house as a separate dwelling. This home has been in constant use as a residence and illustrates the skill and endurance with which the Florida pioneers built. Jackson County Historical Commission 1972” Top of sign: Top of sign: Jackson County 1822, Andrew Jackson emblem National Register of Historic Places #72000326