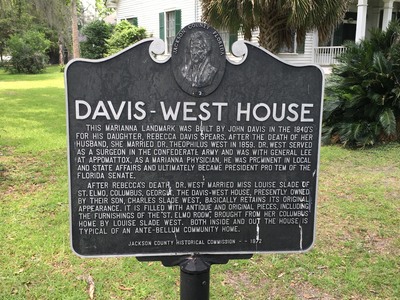 The marker reads: “Davis West House -- This Marianna landmark was built by John Davis in the 1840’s for his daughter, Rebecca Davis Spears. After the death of her husband, she marries Dr. Theophilus West in 1859. Dr. West served as a surgeon in the Confederate Army and was with General Lee at Appomattox. As a Marianna physician, he was prominent in local and state affairs and ultimately became President Pro Tem of the Florida Senate. After Rebecca’s death, Dr. West married Miss Louise Slade of St. Elmo, Columbus, Georgia. The Davis-West House, presently owned by their son, Charles Slade West, basically retains its original appearance. It is filled with antique and original pieces, including furnishings of the ‘St. Elmo Room’, brought from her Columbus home by Louise Slade West. Both inside and out the house is typical of an Ante-bellum community home. Jackson County Historical Commission - - 1972” Top of sign: Jackson County 1822, Andrew Jackson emblem Theophilus West House - National Register of Historic Places #72000328