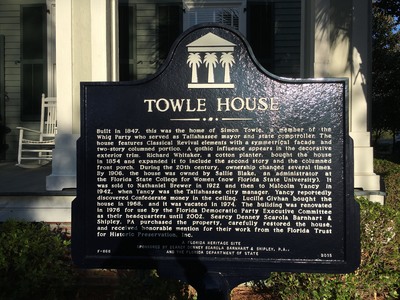 The marker reads: "TOWLE HOUSE Built in 1847, this was the home of Simon Towle, a member of the Whig Party who served as Tallahassee mayor and state comptroller. The house features Classical Revival elements with a symmetrical facade and two-story columned portico. A gothic influence appears in the decorative exterior trim. Richard Whitaker, a cotton planter, bought the house in 1854 and expanded it to include the second story and the columned front porch. During the 20th century, ownership changed several times. By 1906, the house was owned by Sallie Blake, an administrator at the Florida State College for Women (now Florida State University). It was sold to Nathaniel Brewer in 1922 and then to Malcolm Yancy in 1942, when Yancy was the Tallahassee city manager. Yancy reportedly discovered Confederate money in the ceiling. Lucille Givhan bought the house in 1968, and it was vacated in 1974. The building was renovated in 1976 for use by the Florida Democratic Party Executive Committee as their headquarters until 2002. Searcy Denney Scarola Barnhart & Shipley, PA purchased the property, carefully restored the house, and received honorable mention for their work from the Florida Trust for Historic Preservation, Inc. F-866 A FLORIDA HERITAGE SITE SPONSORED BY SEARCY DENNEY SCAROLA BARNHART & SHIPLEY, P.A., AND THE FLORIDA DEPARTMENT OF STATE 2015"