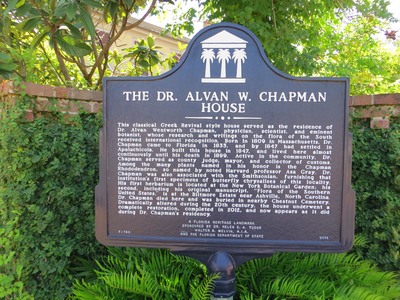 The marker reads: "THE DR. ALVAN W. CHAPMAN HOUSE This classical Greek Revival style house served as the residence of Dr. Alvan Wentworth Chapman, physician, scientist, and eminent botanist, whose research and writings on the flora of the South received international recognition. Born in 1809 in Massachusetts, Dr. Chapman came to Florida in 1835, and by 1847 had settled in Apalachicola. He built this house in 1847, and lived here almost continuously until his death in 1899. Active in the community, Dr. Chapman served as county judge, mayor, and collector of customs. Among the many plants named in his honor is the Chapman Rhododendron, so named by noted Harvard professor Asa Fray. Dr. Chapman was also associated with the Smithsonian, furnishing that institution’s first specimens of butterfly chrysalises of this locality. His first herbarium is located at the New York Botanical Garden; his second, including his original manuscript, “Flora of the Southern United States,” is at the Biltmore Estate near Ashville, North Carolina. Dr. Chapman died here and was buried in nearby Chestnut Cemetery. Dramatically altered during the 20th century, the house underwent a complete restoration, completed in 2012, and now appears as it did during Dr. Chapman’s residency. F-740 A FLORIDA HERITAGE LANDMARK SPONSORED BY DR. HELEN E.A. TUDOR WALTER B. MELVIN, A.I.A. AND THE FLORIDA DEPARTMENT OF STATE 2012"