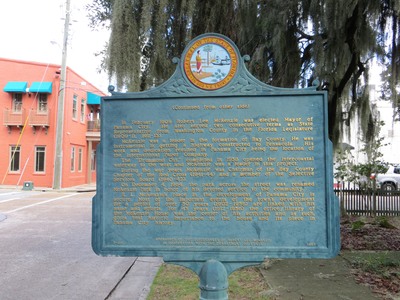 “(Continued from other side) In February 1909 Robert Lee McKenzie was elected Mayor of Panama City. He also served two consecutive terms as State representative from Washington County in the Florida Legislature (1909-11, 1911-13). McKenzie was a leader in the formation of Bay County. He was instrumental in getting a highway constructed to Pensacola. His work and dedication resulted in Panama City being the location of the International Paper Company. The “Drummond Cut” completed in 1938 opened the intercoastal waterway to the west and McKenzie was a leader in this project. During the war years, McKenzie was Chairman of the Bay County Chapter of the Red Cross (19401-44) and a member of the Selective Services Board (1940-47). On December 4, 1964, the park across the street was renamed McKenzie Park in honor of his devoted service to the community. R.L. McKenzie’s place in the development of Panama City is secure. Most of the important events of the town’s development for a period of over 50 years (1902-1956) are linked with his name and efforts. For 45 years (1912-1956) the office/library of the McKenzie House was the center of his activities and as such, gives real historic importance to the house and its place in Panama City history. F-315 Sponsored by the Descendants of Robert Lee McKenzie in Cooperation with the Department of State 1987” Top of the sign: Image of the Great Seal of the State of Florida – In God We Trust