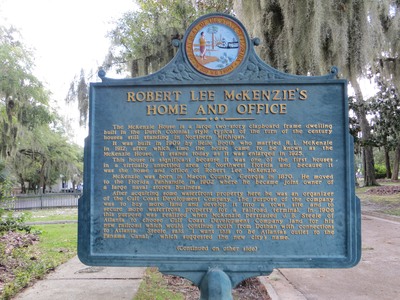 “ROBERT LEE MCKENZIE’S HOME AND OFFICE – The McKenzie House is a large two-story clapboard frame dwelling built in the Dutch Colonial style typical of the turn of the century houses still standing in Northern Michigan. It was built in 1909 by Belle booth who married R.L. McKenzie in 1912; after which time the house came to be known as the McKenzie House. It stands today as it was enlarged in 1925. This house is significant because it was one of the first houses in a virtually unsettled area of Northwest Florida and because it was the home and office of Robert Lee McKenzie. McKenzie was born in Macon County, Georgia in 1870. He moved to the Florida Panhandle in 1902 where he became joint owner of a large naval stores business. After acquiring some waterfront property here he was an organizer of the Gulf Coast Development Company. The purpose of the company was to buy more land and develop it into a town site and to secure more waterfront property for a railroad terminal. In 1906 this purpose was realized when McKenzie persuaded J.B. Steele of Atlanta to choose Gulf Coast Development company land for his new railroad which would continue south from Dothan with connections to Atlanta. Steele said “I want this to be Atlanta’s outlet to the Panama Canal” which suggested the new city’s name. (Continued on other side)” Top of the sign: Image of the Great Seal of the State of Florida – In God We Trust