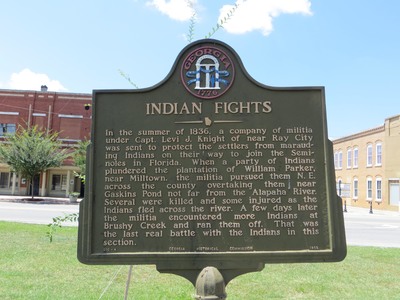 The marker reads: "INDIAN FIGHTS In the summer of 1836, a company of militia under Capt. Levi J. Knight of near Ray City was sent to protect the settlers from marauding Indians on their way to join the Seminoles in Florida. When a party of Indians plundered the plantation of William Parker, near Milltown, the militia pursued them N.E. across the county overtaking them near Gaskins Pond not far from the Alapaha River. Several were killed and some injured as Indians fled across the river. A few days later the militia encountered more Indians at Brushy Creek and ran them off. That was the last real battle with the Indians in this section. 010-4 GEORGIA HISTORICAL COMMISSION 1956" Top of sign: The Great Seal of Georgia – Georgia 1776 Constitution Justice Wisdom Moderation