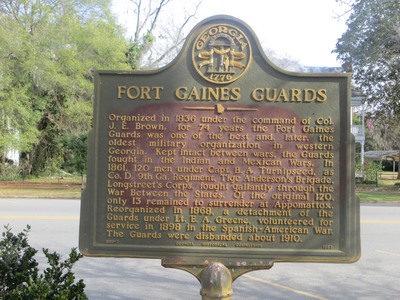 The marker reads: "FORT GAINES GUARDS Organized in 1836 under the command of Col. J. E. Brown, for 74 years the Fort Gaines Guards was one of the best and, later, the oldest military organization in western Georgia. Kept intact between wars, the Guards fought in the Indian and Mexican Wars. In 1861, 120 men under Capt. B. A. Turnipseed, as Co. D, 9th Ga. Regiment, Tige Anderson’s Brigade, Longstreet’s Corps, fought gallantly through the War Between the States. Of the original 120, only 13 remained to surrender at Appomattox. Reorganized in 1868, a detachment of the Guards under Lt. E. A. Greene, volunteered for service in 1898 in the Spanish-American War. The Guards were disbanded about 1910. 030-7 GEORGIA HISTORICAL COMMISSION 1957" Top of sign: The Great Seal of Georgia – Georgia 1776 Constitution Justice Wisdom Moderation