Battle of the Blankets Marker Worth County, GA 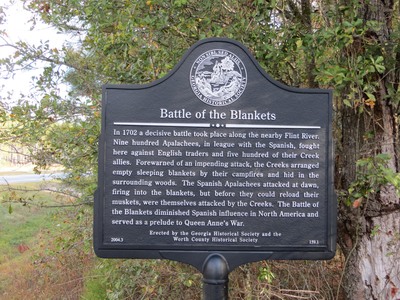 The marker reads: "Battle of the Blankets In 1702 a decisive battle took place along the nearby Flint River. Nine hundred Apalachees, in league with the Spanish, fought here against English traders and five hundred of their Creek allies. Forewarned of an impending attack, the Creeks arranged empty sleeping blankets by their campfires and hid in the surrounding woods. The Spanish Apalachees attacked at dawn, firing into the blankets, but before they could reload their muskets, were themselves attacked by the Creeks. The Battle of the Blankets diminished Spanish influence in North America and served as a prelude to Queen Anne’s War. 2004.3 Erected by the Georgia Historical Society and the Worth County Historical Society 159.1" Top of sign: Georgia Historical Society emblem