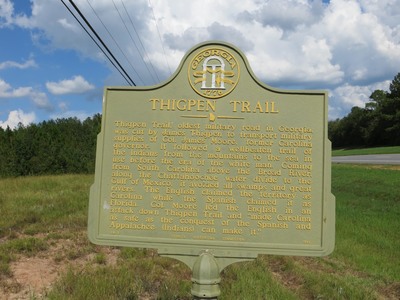 The marker reads: "THIGPEN TRAIL Thigpen Trail, oldest military road in Georgia, was cut by James Thigpen to transport military supplies of Col James Moore, former Carolina governor. It followed a wellbeaten trail of the Indians from the mountains to the sea in use before the era of the white man. Coming from South Carolina above the Broad River, along the Chattahoochee water divide to the Gulf of Mexico, it avoided all swamps and great rivers. The English claimed the territory as Carolina while the Spanish claimed it as Florida. Col. Moore led the English in an attack down Thigpen Trail and “made Carolina as safe as the conquest of the Spanish and Appalachee (Indians) can make it.” 159-3 GEORGIA HISTORICAL COMMISSION 1956" Top of sign: The Great Seal of Georgia – Georgia 1776 Constitution Justice Wisdom Moderation