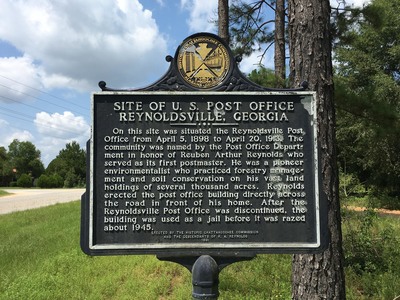 The marker reads: "SITE OF U. S. POST OFFICE REYNOLDSVILLE, GEORGIA On this site was situated the Reynoldsville Post Office from April 5, 1898 to April 20, 1913. The community was named by the Post Office Department in honor of Reuben Arthur Reynolds who served as its first postmaster. He was a pioneer environmentalist who practiced forestry management and soil conservation on his vast land holdings of several thousand acres. Reynolds erected the post office building directly across the road in front of his home. After the Reynoldsville Post Office was discontinued, the building was used as a jail before it was razed about 1945. ERECTED BY THE HISTORIC CHATTAHOOCHEE COMMISSION AND THE DESCENDANTS OF R. A. REYNOLDS 1991" Top of the sign: Historic Chattahoochee Commission Alabama-Georgia emblem