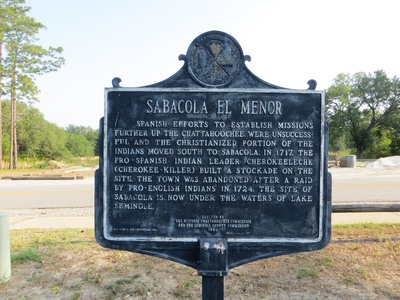 The marker reads: "SABACOLA EL MENOR Spanish efforts to establish missions further up the Chattahoochee were unsuccessful and the Christianized portion of the Indians moved south to Sabacola. In 1717, the pro-Spanish Indian leader Cherokeeleche (Cherokee-killer) built a stockade on the site. The town was abandoned after a raid by pro-English Indians in 1724. The site of Sabacola is now under the waters of Lake Seminole. ERECTED BY THE HISTORIC CHATTAHOOCHEE COMMISSION AND THE SEMINOLE COUNTY COMMISSION 1980 J. J. JAXON CO, - EUFAULA, AL."