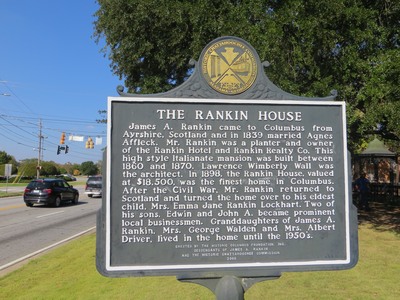 The marker reads: "THE RANKIN HOUSE James A. Rankin came to Columbus from Ayrshire, Scotland and in 1839 married Agnes Affleck. Mr. Rankin was a planter and owner of the Rankin Hotel and Rankin Realty Co. This high style Italianate mansion was built between 1860 and 1870. Lawrence Wimberly Wall was the architect. In 1898, the Rankin House, valued at $18,500, was the finest home in Columbus. After the Civil War, Mr. Rankin returned to Scotland and turned the home over to his eldest child, Mrs. Emma Jane Rankin Lockhart. Two of his sons, Edwin and John A. became prominent local businessmen. Granddaughters of James A. Rankin, Mrs. George Walden and Mrs. Albert Driver, lived in the home until the 1950’s. ERECTED BY THE HISTORIC COLUMBUS FOUNDATION, INC. DESCENDANTS OF JAMES A. RANKIN AND THE HISTORIC CHATTAHOOCHEE COMMISSION 2000"