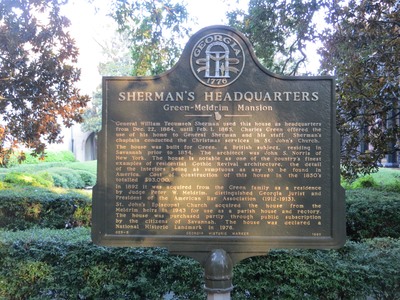 The marker reads: "SHERMAN'S HEADQUARTERS Green-Meldrim Mansion General William Tecumseh Sherman used this house as headquarters from Dec. 22, 1864, until Feb. 1, 1865. Charles Green offered the use of his home to General Sherman and his staff. Sherman's chaplain conducted the Christmas services in St. John's Church. The house was built for Green, a British subject, residing in Savannah prior to 1854. The architect was John S. Norris of New York. The house is notable as one of the country's finest examples of residential Gothic Revival architecture, the detail of the interiors being as sumptuous as any to be found in America. Cost of the construction of this house in the 1850's totalled $93,000. In 1892 it was acquired from the Green family as a residence by Judge Peter W. Meldrim, distinguished Georgia jurist and President of the American Bar Association (1912-1913). St. John's Episcopal Church acquired the house from the Meldrim heirs in 1943 for use as a parish house and rectory. The house was purchased partly through public subscription by the citizens of Savannah. The house was declared a National Historic Landmark in 1976. 025-5 GEORGIA HISTORIC MARKER 1980" Top of sign: Georgia 1776 emblem