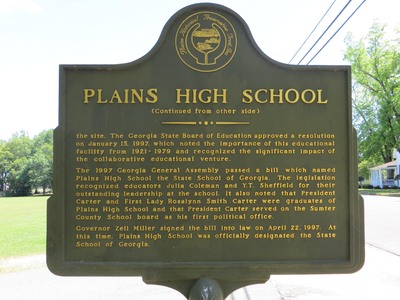 The marker reads: "PLAINS HIGH SCHOOL (Continued from other side) the site. The Georgia State Board of Education approved a resolution on January 15, 1997, which noted the importance of this educational facility from 1921 - 1979 and recognized the significant impact of the collaborative educational venture. The 1997 Georgia General Assembly passed a bill which named Plains High School the State School of Georgia. The legislation recognized educators Julia Coleman and Y.T. Sheffield for their outstanding leadership at the school. It also noted that President Carter and First Lady Rosalynn Smith Carter were graduates of Plains High School and that President Carter served on the Sumter County School board as his first political office. Governor Zell Miller signed the bill into law on April 22, 1997. At this time, Plains High School was officially designated the State School of Georgia." Top of sign: Plains Historical Preservation Trust, Inc. emblem