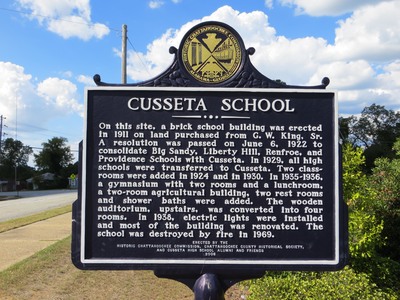 The marker reads: "CUSSETA SCHOOL On this site, a brick school building was erected in 1911 on land purchased from G. W. King, Sr. A resolution was passed on June 6, 1922 to consolidate Big Sandy, Liberty Hill, Renfroe, and Providence Schools with Cusseta. In 1929, all high schools were transferred to Cusseta. Two classrooms were added in 1924 and in 1930. In 1935-1936, a gymnasium with two rooms and a lunchroom, a two-room agricultural building, two rest rooms and shower baths were added. The wooden auditorium, upstairs, was converted into four rooms. In 1938, electric lights were installed and most of the building as renovated. The school was destroyed by fire in 1969. ERECTED BY THE HISTORIC CHATTAHOOCHEE COMMISSION, CHATTAHOOCHEE COUNTY HISTORICAL SOCIETY, AND CUSSETA HIGH SCHOOL ALUMNI AND FRIENDS 2006" Top of the sign: Historic Chattahoochee Commission Alabama-Georgia emblem