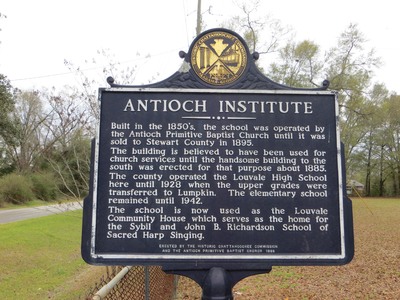 The marker reads: "ANTIOCH INSTITUTE Built in the 1850’s, the school was operated by the Antioch Primitive Baptist Church until it was sold to Stewart County in 1895. The building is believed to have been used for church services until the handsome building to the south was erected for that purpose about 1885. The county operated the Louvale High School here until 1928 when the upper grades were transferred to Lumpkin. The elementary school remained until 1942. The school is now used as the Louvale Community House which serves as the home for the Sybil and John B. Richardson School of Sacred Harp Singing. ERECTED BY THE HISTORIC CHATTAHOOCHEE COMMISSION AND THE ANTIOCH PRIMITIVE BAPTIST CHURCH 1986" Top of the sign: Historic Chattahoochee Commission Alabama-Georgia emblem