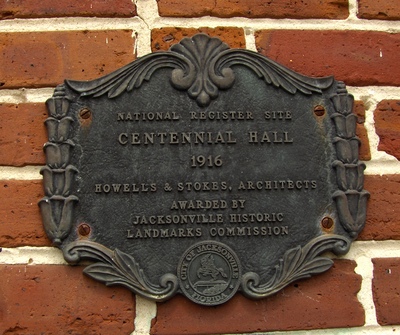 Centennial Hall Plaque, Edward Waters College, Jax, FL. It was founded in 1866 by the African Methodist Episcopal Church (AME) for the education of newly freed slaves. Located near downtown Jacksonville, Florida, the college houses Centennial Hall (a nationally registered historic structure), the school’s oldest building which was constructed in 1916. It is the oldest black college in Florida. It is a member of the United Negro College Fund.
Centennial Hall was completed in 1916 and is the oldest building on the Edward Waters College campus in Jacksonville, Florida. It was designed by the firm of Howells and Stokes, Seattle, Washington. The three-story brick building presents a classic appearance, being completely symmetrical and perfectly balanced on all elevations. It was originally used as high school and elementary school. This plaque was awarded by the Jacksonville Historic Landmarks Commission in 1916.