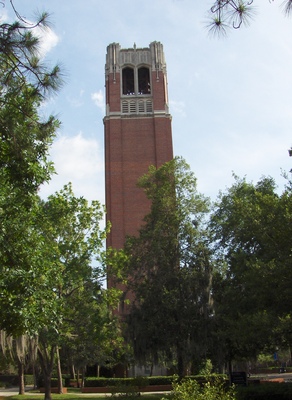 Century Tower 1, UF. Gainesville, FL. Century Tower was built in 1953 to commemorate the 100th anniversary of the university and was dedicated to UF students killed in World Wars I and II. The interior was originally planned as a historic museum and art gallery, but it was never completed. In 1979, a cast-bells carillon was installed in the Century Tower.
It is a 157-foot-tall (48 m) carillon tower in the center of the University of Florida campus in Gainesville, Florida. In 2008 the Century Tower became a contributing property in the University of Florida Campus Historic District which was added to the National Register of Historic Places on April 20, 1989.