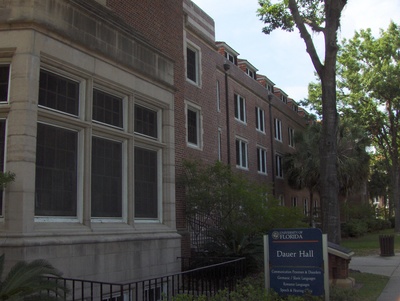 Dauer Hall UF, FL. The Florida Union was renamed in 1975 in honor of Dr. Manning Dauer. Designed by architect Rudolph Weaver, it opened in 1936 as a multipurpose student center . The building’s most distinctive feature, a stained glass window on the east facade, was not installed until 1938.
In 1967, the former Florida Union was converted into the Arts and Sciences building and was home to the College of Liberal Arts and Sciences. Dauer Hall was renovated in 1998. Manning Julian Dauer founded the Department of Political Science at the University of Florida in 1950 and served as the department’s first chair for 25 years.
Dauer Hall is among the buildings constituting the University of Florida Campus Historic District, Contributing Building - University of Florida Campus Historic District - National Register of Historic Places
NRIS #89000322