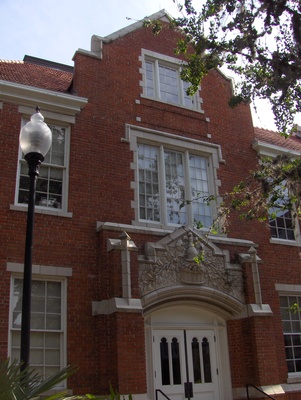 Griffin-Floyd Hall UF 2, Gainesville, FL. Built in 1912, Griffin-Floyd Hall is another of the University of Florida's buildings on the National Register of Historic Places. The building was originally the home to the College of Agriculture and included an arena for judging livestock and a farm machinery room. The building was named after Major Wilbur L. Floyd, a professor and assistant dean in the College of Agriculture. In 1992 the building was renovated with a gift from Ben Hill Griffin, hence the current name of Griffin-Floyd Hall.
This Gothic-style building is currently the home to the philosophy and statistics departments. In 2011, 27 University of Florida students earned bachelor degrees in statistics, and 55 earned philosophy degrees. The university has small graduate programs in both fields as well.
Griffin-Floyd Hall (originally known as Floyd Hall) is an historic academic building located on the northeastern portion of the University of Florida campus in Gainesville, Florida. On June 27, 1979, it was added to the U.S. National Register of Historic Places. #79000655.