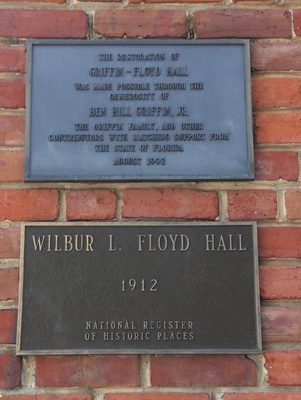 Floyd Hall UF Plaque. Griffin-Floyd Hall (originally known as Floyd Hall) is an historic academic building located on the northeastern portion of the University of Florida campus in Gainesville, Florida. On June 27, 1979, it was added to the U.S. National Register of Historic Places.
"Griffin-Floyd Hall is named for Wilbur Leonidas Floyd, one of three graduate students to receive the first master's degrees ever awarded by the University of Florida, and assistant dean of the College of Agriculture, and for Ben Hill Griffin, Jr., an alumnus of the college and a successful agricultural businessman."
"This building was constructed in 1912 at a cost of $41,458. The architect was William A. Edwards. For many years it was the administration and classroom building for the College of Agriculture. The restored building was dedicated on September 12, 1992. It is listed on the National Register of Historic Places. The Plaque of 1912 when the building was built and 1992 when it was restored and named Griffin-Floyd Hall.