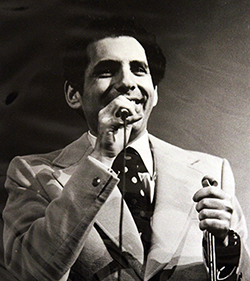 Jack has been a family friend for years, and I actually performed in concert 29, Tubby the Tuba in 1976. A few years ago, during a visit with Jack in his New York apartment, I noticed stacks of cassette tapes gathering dust. He explained that he had been allowed to record the concerts for archival purposes, and that he had just about every Highlights in Jazz concert recorded. Many of the more recent concerts were recorded to CD, but most of the concerts only existed on cassette. Some were quality board tapes, but others were primitive recordings made by Jack’s father holding a cassette deck in the front row!

Realizing that these were priceless, one-of-a-kind recordings, and that if anything should happen to them the recorded performances would be lost forever, I asked Jack if he would allow me to archive his material at UNF. He lovingly agreed, happy that someone who was a friend and who actually performed in his concerts would take such an interest.
With the help of Dean Shirley Hallblade, Courtenay McLeland, and the staff of the UNF Thomas G. Carpenter Library, we were able to secure a foundation grant and the UNF Digital Commons Jack Kleinsinger Library was born.

Jack has also been an avid collector of reviews, photos, and anything else associated with his concerts. In addition to the UNF music collection, he has also permitted us archive his more than 2000 pieces of printed memorabilia. Jack also has an uncanny memory for special events and personal anecdotes, and we have also been able to video tape Jack discussing special moments and memories associated with each concert.

It is the goal of this archival project to preserve and perpetuate the special musical moments that occurred within this collection of more than 500 hours of live music by honoring Jack’s original intent in making these recordings: that the music be archived, preserved and presented for educational purposes. We hope that every student, music researcher, and jazz lover will find an endless supply of creativity and a wealth of jazz knowledge in this collection, and that all will understand and celebrate the scope of the life’s work of one of jazz’s greatest producers and heroes: Jack Kleinsinger.

In 2016, Jack Kleinsinger donated his valuable archive of original tape recordings to the Carpenter Library, and UNF awarded Jack an Honorary Doctorate of Letters. We are so grateful for his lifetime of contribution to the arts, and his generous donation to this University.

We are using the video from his “Tribute The Charlie Parker” concert in all Evolution of Jazz classes to call student attention to Dr. Kleinsinger’s concert production and the archive that is housed at UNF.

In May of 2019, I appeared as a special guest at “Highlights” concert 339. In light of this archive, and Jack’s donation to our University, it was a honor that I will never forget. Thank you, Jack, for conceiving and designing each and every concert, and for providing us with this incredible music.

Special thanks to:
Brian Radock for his creative input and assistance with tape, CD, video production and document copy.
Joe Martin for his assistance with all financial and logistical planning for this grant.
Shirley Hallblade for her insight and assistance in all aspects of this project.
Courtenay, Ryan, Tracey, and all involved with UNF Digital Commons.

This digitized collection has been made accessible for the purposes of education and research. Due to the nature of archival collections, we are not always able to confirm the copyright status of certain materials. We are eager to hear from any rights owners, so that we may obtain accurate information. Upon request, we’ll remove material from public view while we address a rights issue.

This material is protected by the American Federation of Musicians Local 802 under the collective bargaining agreement, and made available for educational and study purposes. It is not available for copying, sampling or any use without written consent of local 802.

Printing is not supported at the primary Gallery Thumbnail page. Please first navigate to a specific Image before printing.