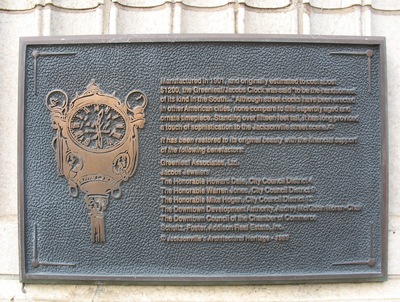 This historical marker is located on the Greenleaf/Jacobs building next to the beautiful freestanding clock, in the heart of downtown Jacksonville, Florida, USA.

It reads: "Manufactured in 1901, and originally estimated to cost about $1,200, the Greenleaf/Jacobs Clock was said "to be the handsomest of its kind in the South..." Although street clocks have been erected in other American cities, none compare to this superbly aged and ornate timepiece. Standing over fifteen feet tall, it has long provided a touch of sophistication to the Jacksonville street scene."

This plaque was placed in 1989, by the Jacksonville's Architectural Heritage. It also inscribes the names of those who helped in its restoration, the main of which were Jacobs Jewelers & Greenleaf Associates Ltd.