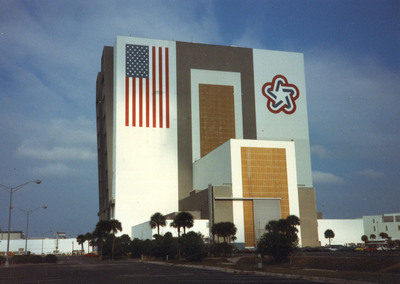 The Vehicle (originally Vertical) Assembly Building, or VAB, at NASA's Kennedy Space Center (KSC) was used to assemble American manned launch vehicles from 1968-2011. The VAB is the largest single-story building in the world, was the tallest building (160.3 m) in Florida until 1974.

The VAB was completed in 1966, to allow for vertical assembly of Saturn V Rocket for the Apollo program. When the Space Shuttle program started it was renamed Vehicle Assembly Building. The American Flag painted on the building was the largest in the world when added in 1976, along with the star logo which was replaced by NASA insignia in 1998.

The Space Shuttle was retired in 2011.