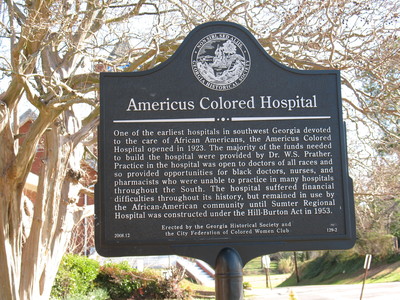 This was one of the earliest hospitals devoted to the care of the African Americans. It was opened in 1923. Most of the funds were provided by Dr. W. S. Prather. Later it closed down due to financial difficulties. It is now a Day Care Center and Food Pantry.

This marker was erected by the Georgia Historical Society & City Federation of Colored Women Club. It reads as :

" One of the earliest hospitals in southwest Georgia devoted to the care of African Americans, the Americus Colored Hospital opened in 1923. The majority of the funds needed to build the hospital were provided by Dr. W.S. Prather. Practice in the hospital was open to doctors of all races and so provided opportunities for black doctors, nurses, and pharmacists who were unable to practice in many hospitals throughout the South. The hospital suffered financial difficulties throughout its history, but remained in use by the African-American community until Sumter Regional Hospital was constructed under the Hill Burton Act in 1953."