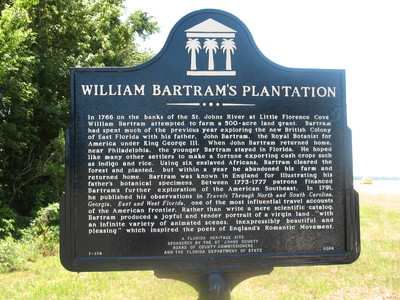 In the spring of 1774, William Bartram, a naturalist from Kingsessing, Pennsylvania, traveled inland from the St. Johns River to the Alachua Savanna, present-day Paynes Prairie Preserve. Having failed in 1766 to establish a plantation outside near present-day Jacksonville, Florida, Bartram had not yet made a place for himself in life. Now, he returned to East Florida to follow his favorite pursuit, the study of plants and animals.

This marker is located on Sands Bridge in St Augustine in St Johns County Fl. It is sponsored by the St. Johns County Board of County Commissioners and The Florida Department of State .

In 1766 on the banks of the St. Johns River at Little Florence Cove, William Bartram attempted to farm a 500-acre land grant. Bartram had spent much of the previous year exploring the new British colony of East Florida with his father, John Bartram, the Royal Botanist for America under King George III. When John Bartram returned home, near Philadelphia, the younger Bartram stayed in Florida. He hoped like many other settlers to make a fortune exporting cash crops such as indigo and rice. Using six enslaved Africans, Bartram cleared the forest and planted, but within a year he abandoned his farm and returned home. Bartram was known in England for illustrating his fathers botanical specimens. Between 1773-1777 patrons financed Bartrams further exploration of the American Southeast. In 1791, he published his observations in Travels Through North and South Carolina, Georgia, East and West Florida, one of the most influential travel accounts of the American frontier.