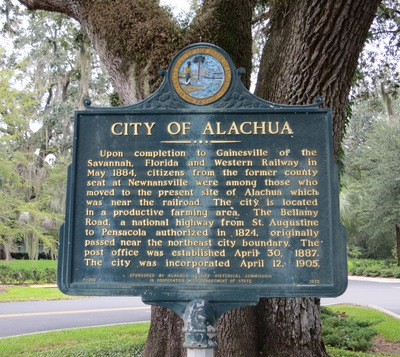 This marker is located on US 441 in Alachua, Florida. It was sponsored by the Alachua County Historical Commission, in Cooperation with Department of State.

" Upon completion to Gainesville of the Savannah, Florida and Western Railway in May 1884, citizens from the former county seat at Newnansville were among those who moved to the present site of Alachua which was near the railroad. The city is located in a productive farming area. The Bellamy Road, a national highway from St. Augustine to Pensacola authorized in 1824, originally passed near the northeast city boundary. The post office was established April 30, 1887. The city was incorporated April 12, 1905."