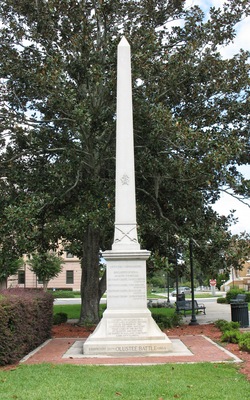 The Olustee Battle Monument is located in a city park in the Lake City Historic Commercial District in Lake City, Florida. The monument is an obelisk located in the southwest corner of Olustee Park. This monument was probably placed between 1910-1915.

The text on the monument reads as :

"This monument erected to perpetuate in loving memory the 151 soldiers of the Confederate Army who lost their lives at the Battle of Olustee and who now lie buried in Oaklawn Cemetery, Lake City, Florida."