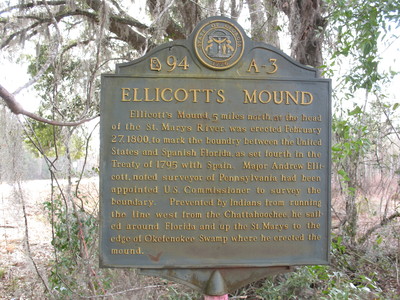 This marker is located on Ellicotts Mound , 5 miles north at the head of the St Marys River.

" Ellicott`s Mound, 5 miles north, at the head of the St. Marys River, was erected February 27, 1800, to mark the boundary between the United States and Spanish Florida, as set fourth in the Treaty of 1795 with Spain. Major Andrew Ellicott noted surveyor of Pennsylvania had been appointed U.S. Commissioner to survey the boundary. Prevented by Indians from running the line west from the Chattahoochee, he sailed around Florida and up the St. Marys to the edge of Okefenokee Swamp where he erected the mound. "