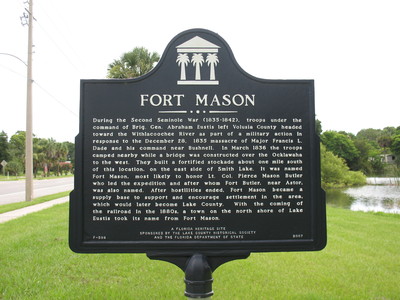 More than 150 years ago Fort Mason on Umatilla was a place where tired soldiers sought refuge and ammunition as they battled the Seminoles.

" During the Second Seminole War (1835-1842), troops under the command of Brig. Gen. Abraham Eustis left Volusia County headed toward the Withlacoochee River as part of a military action in response to the December 28, 1835 massacre of Major Francis L. Dade and his command near Bushnell. In March 1836 the troops camped nearby while a bridge was constructed over the Ocklawaha to the west. They built a fortified stockade about one mile south of this location, on the east side of Smith Lake. It was named Fort Mason, most likely to honor Lt. Col. Pierce Mason Butler who led the expedition and after whom Fort Butler, near Astor, was also named. After hostilities ended, Fort Mason became a supply base to support and encourage settlement in the area, which would later become Lake County. With the coming of the railroad in the1880s, a town on the north shore of Lake Eustis took its name from Fort Mason."

Placed by the Lake County Historical Society and the FL Dept. of State.