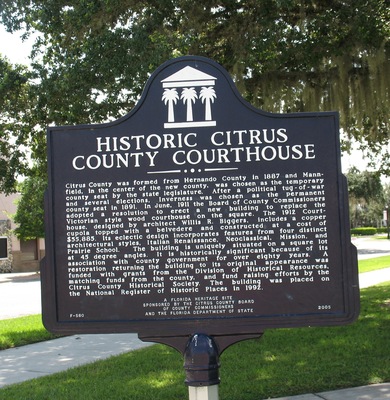 " Citrus County was formed from Hernando County in 1887 and Mannfield, in the center of the new county, was chosen as the temporary county seat by the state legislature. After a political tug-of-war and several elections, Inverness was chosen as the permanent county seat in 1891. In June, 1911 the Board of County Commissioners adopted a resolution to erect a new building to replace the Victorian style wood courthouse on the square. The 1912 Courthouse, designed by architect Willis R. Biggers, includes a copper cupola topped with a belvedere and constructed at a cost of $55,885. Its eclectic design incorporates features from four distinct architectural styles, Italian Renaissance, Neoclassical, Mission, and Prairie School. The building is uniquely situated on a square lot at 45 degree angles. It is historically significant because of its association with county government for over eighty years. A restoration returning the building to its original appearance was funded with grants from the Division of Historical Resources, matching funds from the county, and fund raising efforts by the Citrus County Historical Society. The building was placed on the National Register of Historic Places in 1992."

Sponsors: THE CITRUS COUNTY BOARD OF COUNTY COMMISSIONERS AND THE FLORIDA DEPARTMENT OF STATE