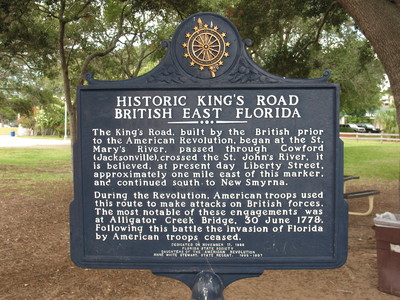 This marker is located by Friendship Fountain in Jacksonville, Florida to indicate the location of a road built by the British.

" The King's Road, built by the British prior to the American Revolution, began at the St. Mary's River, passed through Cowford (Jacksonville), crossed the St. John's River, it is believed, at present day Liberty Street, approximately one mile east of this marker, and continued south to New Smyrna.

During the Revolution, American troops used this route to make attacks on British forces. The most notable of these engagements was at Alligator Creek Bridge, 30 June 1778. Following this battle the invasion of Florida by American troops ceased."