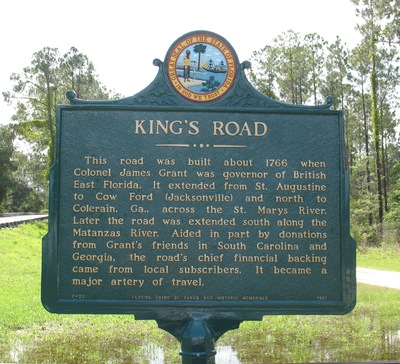 This marker is located on Old King's Rd. N just south of I-95 overpass.

" This road was built about 1766 when Colonel James Grant was governor of British East Florida. It extended from St. Augustine to Cowford (Jacksonville) and north to Colorain, Ga., across the St. Marys River. Later the road was extended south along the Matanzas River. Aided in part by donations from Grant's friends in South Carolina and Georgia, the road's chief financial backing came from local subscribers. It became a major artery of travel."