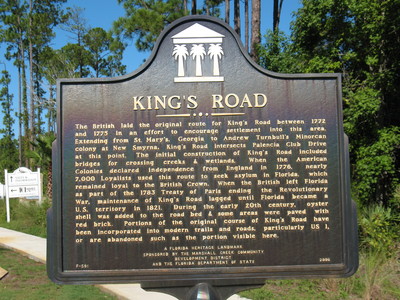 The marker text reads as follows:

"The British laid the original route for King's Road between 1772 and 1775 in an effort to encourage settlement into this area. Extending from St. Mary's, Georgia to Andrew Turnbull's Minorcan colony at New Smyrna, King's Road intersects Palencia Club Drive at this point. The initial construction of King's Road included bridges for crossing creeks & wetlands. When the American Colonies declared independence from England in 1776, nearly 7,000 Loyalists used this route to seek asylum in Florida, which remained loyal to the British Crown. When the British left Florida as part of the 1783 Treaty of Paris ending the Revolutionary War, maintenance of King's Road lagged until Florida became a U.S. territory in 1821. During the early 20th century, oyster shell was added to the road bed & some areas were paved with red brick. Portions of the original course of King's Road have been incorporated into modern trails and roads, particularly U.S. 1, or are abandoned such as the portion visible here. "