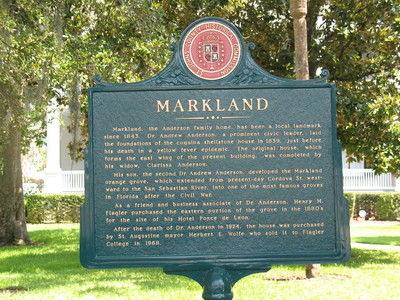 " Markland, the Anderson family home, has been a local landmark since 1843. Dr. Andrew Anderson, a prominent civic leader, laid the foundations of the coquina shellstone house in 1839 just before his death in a yellow fever epidemic. The original house, which forms the east wing of the present building was completed by his widow, Clarissa Anderson.

His son, the second Dr. Andrew Anderson, developed the Markland orange grove, which extended from present-day Cordova St. westward to the San Sebastian River, into one of the most famous groves in Florida, after the Civil War. As a friend and business associate of Dr. Anderson, Henry M. Flagler purchased the eastern portion of the grove in the 1880's for the site of the Hotel Ponce de Leon. After the death of Dr. Anderson in 1924, the house was purchased by St. Augustine mayor, Herbert E. Wolfe who sold it to Flagler College in 1968."