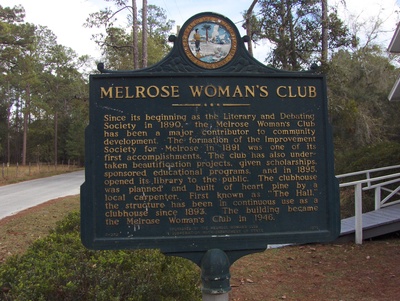 The Melrose Woman's Club (also known as The Literary and Debating Society or The Hall) is a historic woman's club in Melrose, Florida. It is located at Pine Street. On April 6, 1978, it was added to the U.S. National Register of Historic Places. The marker is in front of the Club building.

" Since its beginning as the Literary and Debating Society in 1890, the Melrose Woman's Club has been a major contributor to community development. The formation of the Improvement Society for Melrose in 1891 was one of its first accomplishments. The club has also undertaken beautification projects, given scholarships, sponsored educational programs, and in 1895, opened its library to the public. The clubhouse was planned and built of heart pine by a local carpenter. First known as "The Hall," the structure has been in continuous use as a clubhouse since 1893. the building became the Melrose Woman's Club in 1946."