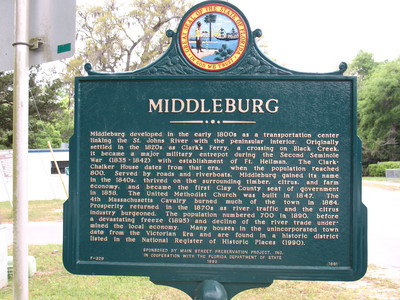 This marker is located on the corner of Wharf Street and Main St in Clay County, Middleburg, Florida.

" Middleburg developed in the early 1800s as a transportation center linking the St. Johns River with the peninsular interior. Originally settled in the 1820s as Clark´s Ferry, a crossing on Black Creek, it became a major military entrepot during the Second Seminole war (1835-1842) with establishment of Ft. Heilman. The Clark-Chalker House dates from that era, when the population reached 800. Served by roads and riverboats, Middleburg gained its name in the 1840s, thrived on the surrounding timber, citrus, and farm economy, and became the first Clay County seat of government in 1858. The United Methodist Church was built in 1847. The 4th Massachusetts Cavalry burned much of the town in 1864. Prosperity returned in the 1870s as river traffic and the citrus industry burgeoned. The population numbered 700 in 1890, before a devastating freeze (1895) and decline of the river trade undermined the local economy. Many houses in the unincorporated town date from the Victorian Era and are found in a historic district listed in the National Register of Historic Places (1990). "

Sponsors: sponsored By Main Street Preservation Project, Inc. in Cooperation with the Florida Department of State - 1990